Add a Bill to a Cap 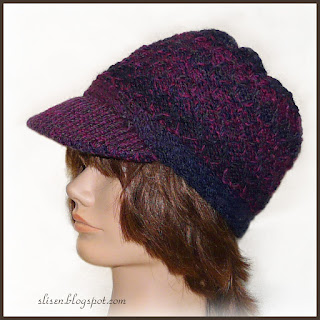 It's quite easy actually to add a bill to a cap.  I used a favorite cap pattern, knit on my bulky machine with 80 sts at T9 with a bulky yarn.  This particular cap features a non-stretchy band, which I doubled in length to accomodate a fold over band.  If I were putting a bill on a stretchy band such as ribbing, I probably would stabilize the front part of the band before attaching the bill, maybe with a slip stitch at the fold line or something similar.  So I made the hat and added the bill like this:

1)  Fold the band in half lengthwise and loosely
tack down to the beginning row of the hat body, picking up
the inner edge stitch loop of the band only.

2) With wrong side facing, hang 30 sts from
the front center of the hat band.  Somewhat stretch the
band while picking up stitches.

4)  RC000, Put machine on hold.  On carriage side, bring
out the first working needle to hold position.  T8, Knit across.

5)  Repeat on the right hand side. 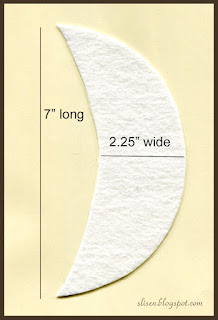 7)  When the same number of needles are in HP on each side, reverse the shaping to increase in the same order as above (1, 2, 1, 2, 1, 1) until all needles are back into work, except 1 on each side.  Put both needles into working position and knit across.  Wrap the 1st needle on carriage side on each pass to prevent holes.  Leave a long tail of yarn for sewing.

8)  Scrap off with several rows of waste yarn.

9)  Insert a 'moon' shaped piece of heavy Pellon interfacing between the layers and pin in place.  Just a note that the more rounded the 'moon' shape is against the head, the less it will flop down.

11) After the bill has been sewn down with the Pellon inserted, inconspicuously tack in several places on the underside of the bill with a sewing needle and thread to hold the Pellon in place during wearing and laundry.

12)  Work 1 row of crocheted (latch tool) slip stitch on the inside of the bill, going thru each stitch of the bill and picking up a stitch from the inside layer of the band.  This will keep it from stretching and to help keep the bill from flopping down. 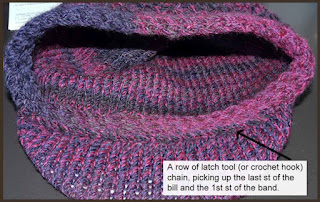